Aeration to Mitigate Iron in the Water - An Experiment

So we've never had to use the heat cable in our well as the daily pumping to the holding tank in the kitchen has always managed to keep the well water open.  That's a blessing that I really cannot stress enough.

Unfortunately, the water that we pump is just lousy, lousy, lousy with iron.  We don't even begin to entertain the notion of white clothes.  Our Berkey filters are covered in about four millimeters of sludge every time I try to wash them.  If we don't run the bathroom tap for a day for some reason, the water comes out very gritty, or sometimes like chocolate milk :(.

We don't have enough pressure or space for any fancy filtering systems, so I've had to seek out ideas that are decidedly low technology, low space, and with low power requirements.

I had heard a few indications that injecting air into your water system would somehow precipitate out the iron - maybe it discourages the bacteria that fix it?  I'm not completely sure, but I'm willing to try things.  So with that in mind, Kenny and I hit up the local big box pet store and purchased the largest bubbler we could find.  I've tried smaller bubblers in the past, but they've been too dependent on small solar panels, or had to be manually started every time I wanted them to run.  This is my last attempt at a larger setup.

The pump had four outputs, which was three more than I really thought I needed.  I bought two T connectors and brought that down to two outputs.  I also bought two long air stones and twenty-five feet of air hose.

I assembled most of this, and then waited for the well to finally melt out of the snow.

Once we could see the cover, Kenny dug a lovely trench from the cabin down to the well, and I headed down to check things out.


The water level was worryingly close to my outlet inside, which is a situation I've been aware of for some time.  I disconnected the heating cable, and then hooked up the air pump instead.

I lowered the air stone to the bottom of the well and trimmed the hose into two lengths that would allow the stones to be fully submerged to the stone base.  Unfortunately, no bubbles developed at that depth.  Sigh.  I raised the stones up until I felt that there was a good supply of bubbles coming through the water, and fastened the hoses in place.  I realize that the bubbler is in a precarious position, but this is both an experiment, and the best I could realistically do.


Indoors I've been trying to press the timer switch in the kitchen that was normally reserved for the heating cable.  It has a maximum time of thirty minutes, which is far less than I think the bubbler really needs to run.  I plan on replacing it with a daily timer as soon as I can purchase one.  It seems to draw so little power, I could probably just leave it on constantly, but in winter I may want to be able to have more granular control, so I think the timer with more features is the way to go.


I guess it may take a week or two or three to flush out the current system and begin to see any results, if any are to be seen.  I'll try to post back.  In the meantime, wish us luck!

As part of our routine of homeschooling, on so-called "regular day"s, Kenny usually cracks open a lesson book at or above his contemporaries' grade level.  Yesterday he was exempted from any lessons as I had to do computer calls that took up the entire morning.  He comes along with me for most of these, and I feel that interacting with adults and watching me work count for an educational experience.

The day before this though was a regular day, and he worked away at his mathematics lesson on squares and square roots.  I was impressed at how many he tried to do in his head, but I did give him permission to use a calculator for ones that I didn't have memorized or couldn't do easily myself.


We have a Google Home Mini, but for some reason, he prefers to use the calculator for things like this, as he also does for spelling.  Go figure.

He mused if other examples existed.  I quickly pointed out that 001^2 is 1, and 10^2 is 100.  I wonder just how impressive my mathematical feat was to him, as he was able to contain his admiration completely.

Grabbing a small notebook he used as a scratch pad, he began working his way through the squares from 1 to 99.  At least, this was his ambition. 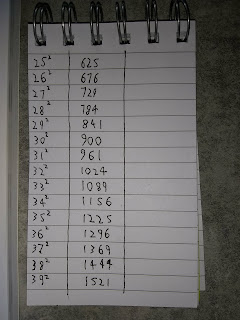 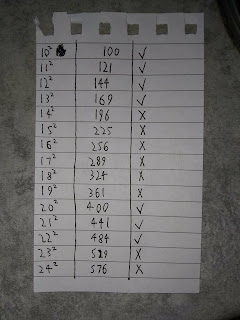 I'm lazy efficient, and mused if it wouldn't be easier to write a computer programme to calculate these squares and simply print them out in a format that one could more quickly skim them.  It was in under an hour that he had written a python script that actually did the squares AS WELL AS the comparison.

I'll attach the script at the end, feel free to copy as you will.  Please note that while I'm a coder from old, I have no experience with Python - all of this coding was his from start to finish; I don't know how it works.

In case you're curious, it turns out that there are four of these relationships in a row, then three, followed by two and then a single outlier before the pattern vanishes.

Score one for homeschooling allowing him the ability to go down a side road that would rarely be permitted in a regular environment!