Well, on Wednesday Kenny started demanding mummu's pulla.  After a little looking around, now I think what he really meant was korvapuusti - I'm sure my mother-in-law can set us straight as to what we wanted.  I was down with that, except we didn't have eggs in the house, and we didn't have cardamom (I wasn't going to buy this anyway - I can't imagine what it could be used for EXCEPT for pulla).
He promptly pooped his pants, then threw a huge tantrum at the store, and then peed all over his car seat, being sure to include the back seat of the car as well.  We had the ingredients, but not the will to actually make our treat.  That had to wait until Thursday.
True confession - I barely looked for a pulla recipe - what I found didn't sound like what I was thinking of, and I figured it was mostly like a cinnamon roll anyway, something I figured I was more culturally capable of making. 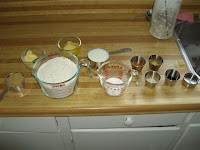 So this is really a slightly modified recipe for cinnamon rolls, with the addition of a little local flair (maple syrup).
Ingredients include : 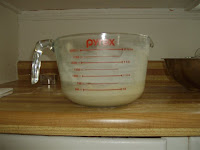 Mix (proof) the yeast and water and set it aside for a few minutes.  Then blend the melted butter, milk, egg, and half the flour together.  Add the yeast mixture, and then gradually mix in the remaining flour. 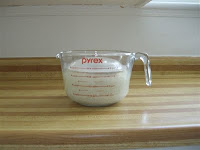 Grease your hands generously with the extra butter, as well as greasing a bowl.  Shape the dough into a nice, well kneaded ball.  Toss in the bowl and allow it to rise until about double in volume - an hour or two, depending on temperatures.  I always put stuff I need to keep warm in my oven with just the oven light on, that works famously.
Pound it down again, and set it aside for about 10 minutes while you grease up two 9x12" pans.  Divide the dough between the two pans, spread it out on them, and then apply the maple syrup on top of both. 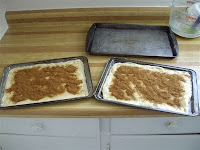 Mix together the cinnamon and brown sugar, and sprinkle it liberally over both trays.  Carefully roll it lengthwise into two logs, being careful to press them together firmly so that they don't unwind. 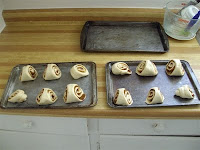 With a greased knife, cut the logs into segments, traditionally on angles for the visual effect you see in the photograph. 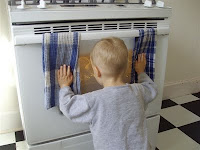 Allow them to rise another ten minutes on their own, then bake at 350 for about 25 minutes. 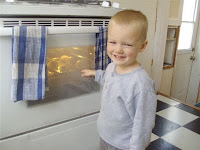 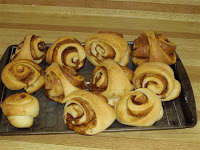 It looks like everyone was happy with how they were appearing...
The final product certainly looked accurate, although mine were pretty large compared to the real ones mummu makes. 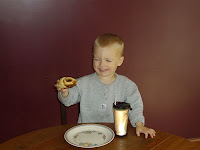 Ahhh, but they still got the review I was looking for.
I now have a bath towel placed strategically between the seat cover and the bottom of the car seat.

Email ThisBlogThis!Share to TwitterShare to FacebookShare to Pinterest
Labels: recipes