I was talking to a neighbour the other day, and they related how they had recently left a job that they really needed and enjoyed, because their boss was making sexist and insulting comments directly to them.
I really admired their ability to take a stand for both themself, and humanity in general.  It really brought back memories of jobs I've had at times, where the people around me, often the boss or supervisor, made comments that were personally offensive, or racist, or bigoted in some fashion or another.  Sadly, I was too young and frightened of the consequences of speaking out.  I needed the jobs, and feared the consequences of confronting the boors around me.
I'm really going to try to do better in the future, and call out people when they make comments like that, and I hope that people around me also take the time and have the courage to point out when I slip up myself, as I'm sure we all do.  I also want to impress upon Ken that he should always be prepared to speak up when he sees or hears someone speaking or doing wrong.  I hope he never feels that a paycheque, or the respect of someone, must come at the cost of allowing them to go through their life without such a check on the damage they can inflict on others.
Well, time to step off my soapbox...
No comments:

Email ThisBlogThis!Share to TwitterShare to FacebookShare to Pinterest
Labels: philosophy

If all goes well, this post should go out while Donna and I are in Thunder Bay.  Although we are constantly looking for the property we wish to purchase, we don't have anything in mind just yet that we are set on purchasing (I do have a favourite one, but it is priced a bit beyond our limit).
It's been difficult to find what we're looking for, and it bears thinking about changing either our standards, or what we are prepared to pay.  Of course, it's also difficult because we want as much money as possible in our pockets so that we aren't forced to spend more time off of the homestead than we really want to.
I wonder how other people have dealt with this situation.  Is it better to get started homesteading sooner, even if it means you have to make sacrifices of time and money, or later, when you can perhaps keep more of your time and money on the homestead?
1 comment:

In an effort to make my degree in classical studies pay off, enjoy that blog title!
It's basically Occam's Razor.
This is just a short post to point out that in spite of my emphasis on simplicity and simplifying my life, the topics range of this blog had spiralled out of control!  You people should tell me when I start including labels as specific as "walden, beer, cider" and "thoreau".  That's too way too much to deal with.
Anyway, I pared them down significantly, and will try to be more cautious about adding them in the future.
No comments:

Email ThisBlogThis!Share to TwitterShare to FacebookShare to Pinterest
Labels: simplicity

I've recently been discussing my friend's upbeat mood and outlook in the face of recent adversity. One of the nice things about our friendship is that while we can be apart on how we philosophize about the world as it is, and as it may be, we still get along famously. (At least, I believe we get along famously, he's always welcome to disagree.)

One book that I like to return to time and again for different insights is Hagakure - The Book of the Samurai. Or, for the cheapskates in my audience (.PDF).
I was trying to discover what Yamamoto has to say about happiness, and found that it would be fodder for two or three more blog posts, but for now the quote that jumped out at me was:

"At times of great trouble or disaster, one word will suffice. At times of happiness, too, one word will be enough. And when meeting or talking with others, one word will do. One should think well and then speak. This is clear and firm, and one should learn it with no doubts. It is a matter of putting forth one's whole effort and having the correct attitude previously. This is very difficult to explain but is something that everyone should work on in his heart. If a person has not learned this in his heart, it is not likely that he will understand it."

I just wish I had this to help pad out my yada yada posting of awhile back.
I also wish I were better able to put this into practise. I'm sure people who know me know that I tend to talk too much, especially when I'm nervous, or when I'm too relaxed. It's caused me no end of head and heartache, realizing that sometimes I've made a terrible faux pas or been too blunt and forward, when I had no intention of causing hurt feelings. Luckily it seems most people can see through my big mouth and realize that there is a sincerely caring person beyond that.
As with simplifying my written word, I am also going to continue trying to simplify my spoken word. Please help me out by telling me when I've said, or typed, too much.
1 comment:

While cleaning up the fridge the other day, I came across my bottle of liquid smoke. As I am often wont to do, I try to clear up odds and ends now and again, so I readily whipped up a fresh batch of a real local delicacy - summer sausage!

As always, it's rewarding to measure out your ingredients ahead of time. You'll want to have: 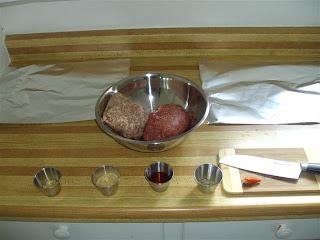 Get right in there with your hands and combine all these components. As you make it more and more often, feel free to adjust the spices to your own taste. I constantly feel that I need to up the black pepper amount, but in our household, we use a pepper grinder rather than ground black pepper, and my arms get tired after grinding out about a tsp or so. 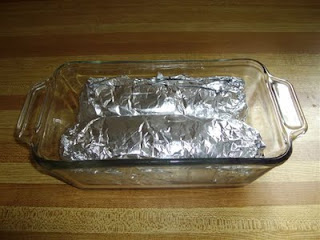 Form this mix into two 1 lb sausages. I usually go for something about 2" in diameter and 6 to 8" long. Place these in the centre of your sheets of foil, wrap them up tightly, place them in a dish, and allow them to marinate about 24 to 48 hours in your refridgerator.

I set them up on a rack sitting on a cookie sheet, poke holes all over the chubs with a toothpick, and place them in the oven. I am also a cheapskate, or maybe an environmentalist, so I rarely preheat an oven. Instead, I just leave things in for a few minutes longer (when was the last time you followed the timing of a recipe and the item was properly cooked? It has never happened to me.) So from cold, I set the oven to 350F and set the timer for 2 hours. After which, I just turn off the oven, and allow everything to cool off slowly. 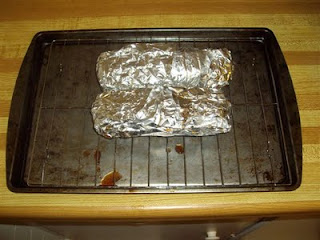 Unwrap, return to the fridge, and serve on bread with cheese and funeral mustard, or just hack off chunks to chew on for a snack. 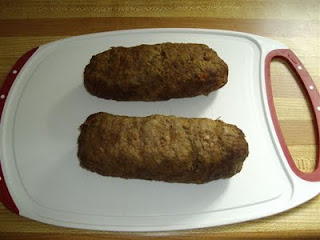 Email ThisBlogThis!Share to TwitterShare to FacebookShare to Pinterest
Labels: recipes

I'm back on a decluttering kick lately. Trying to get stuff off my desk and out of the house if we never or sometimes just rarely use it.
But as I do this, it also got me thinking about other aspects of life and environment that could be decluttered, and today, I realized that probably my conversations could do with occasional judicious editing.
Kenny and I spent the morning, and then while he napped, I spent another hour, removing our back doors, painting their edges, and painting the frames they were in. Previous owners had installed the double doors, but left the wood entirely untreated and exposed to the elements. Donna had noticed that mildew was beginning to form inside on the lower parts of the frame, and my in-laws had also noticed that the trim on the bottom of the doors was pretty ill-fitting on the outside, and was allowing rain and dirt to run INTO the trim, rather than over it.
So anyway, yada yada, Kenny and I fixed up the doors, reinstalled them to a fairly awesome degree, and then settled in.
Donna got home early, and when she asked what we had been up to during the day, I wanted to milk our hard work for as much as possible, and asked Kenny to tell her, and her to guess... Kenny beat around the bush a fair bit, and I spent the better part of five minutes trying to manoeuvre her to the dining room doors to see if she could notice what we had accomplished.
I don't think she was angry, but I got a vibe that she was getting exasperated having to play a guessing game after a long day at work, and she did guess our workmanship in the end. But now that I reconsider the episode, I wonder what gains I really made.
As such, I think I'm going to strive to not play such games in the future, at least, not when everyone isn't enjoying them, and there are other things to do.
Maybe there's some merit to being succinct after all!
1 comment: